The tankoubon is an adaptation that deals with the first half of the 9th Index light novel volume. The Daihaseisai begins and Academy City is opened to the public to view the great sports tournament between the espers of the city. But not all is what it seems, for behind the esper tournament, a secret battle is about to take place. The Anglican Church contacts Academy City regarding an upcoming trade of a spiritual item that could tip the balance of the magic side and the world as a whole, and Kamijou Touma is once again dragged into it.

The largest event in Academy City has begun, the Daihaseisai!!

All the schools that exist in the city participate in the ultra-large scale sports festival, the Daihaseisai. Behind the scenes of the busy event, a courier that was hired by the Roman Catholic Church has entered the city...! Highly popular! The long awaited 12th volume depicting science × magic action has been finally released!! 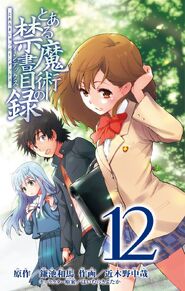 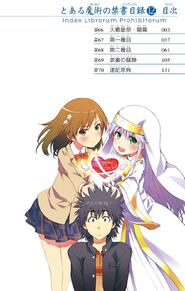 Retrieved from "https://toarumajutsunoindex.fandom.com/wiki/Toaru_Majutsu_no_Index_Manga_Volume_12?oldid=241506"
Community content is available under CC-BY-SA unless otherwise noted.