The tankoubon is an adaptation that deals with the second half of the 9th Index light novel volume and the first half of 10th Index light novel volume. Touma and company continues to try and prevent Oriana Thomson and Lidvia Lorenzetti's plans as innocent bystanders get involved in the conflict. There, they discover that the "delivery" Oriana is making is not all what it seems.

Route Disturb has planted a trap!! 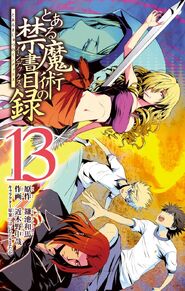 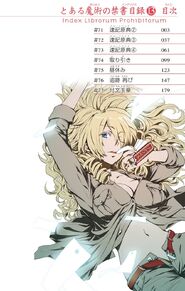 Retrieved from "https://toarumajutsunoindex.fandom.com/wiki/Toaru_Majutsu_no_Index_Manga_Volume_13?oldid=303622"
Community content is available under CC-BY-SA unless otherwise noted.