Kamijou Touma heads to France to destroy the spiritual item, the C-Document!!

Demonstrations against Academy City are spreading across the world. Kamijou Touma knows that the cause is the spiritual item known as the C-Document, and goes to France with Tsuchimikado! However, there, Terra of the Left of God's Right Seat awaits!!

Differences from the magazine release

A few changes were made in the tankōbon release of the volume's chapters.

In Chapter 123, the protests against Academy City now only take 2 pages in the tankōbon and don't spill over to the page where the Interceptor Show is shown. The Interceptor Show page itself is changed, with mechas and mobile weapons shown off instead of jets.

In Chapter 125, Tsuchimikado Motoharu's explanation of the C-Document is expanded across an entire page. The splash page of Motoharu and Touma overlooking Avignon from the jet is changed, with the sequence of panels of Touma complaining about jumping getting its own page.

In Chapter 126, when Itsuwa and Touma go into the museum, all the pages of the panels where Motoharu instructs Touma through the phone about the pipeline they have to destroy are given a black background indicating a flashback.

In Chapter 128, when Touma tries to push Itsuwa aside after missing Terra of the Left, the blade that Terra is using is removed. Finally, after Terra explains Execution of Light, a few panels are dedicated to Touma and Itsuwa pondering how his spell works instead of simply staring at him in silence as in the magazine version. 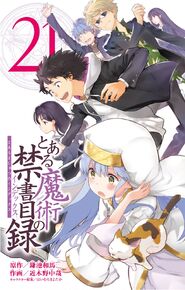 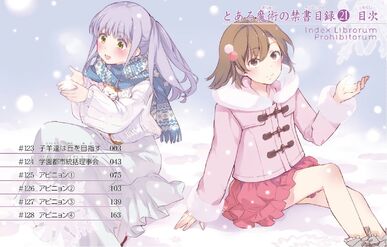