The story features Kanzaki Kaori as the protagonist, as she goes around the world and space doing missions as an agent of Necessarius. However, there is more than meets the eye as each incident she encounters is connected.

At the same time when Misaka Mikoto and Shirai Kuroko were flirting in the Academy City, a magician was running around Western Europe when she received an order from the Necessarius of Anglican Church.

Kanzaki Kaori, one of the "saints" and also exceptional figure in magic side, cooperated with tour guide girl and unreliable jeans shop owner to confront mysterious events.

The story begins when the power of the Kanzaki intersects with the first heroine commemorating swimsuit--![2] 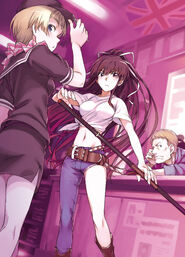