Toaru Majutsu to Kagaku no Ensemble

Toaru Majutsu to Kagaku no Ensemble

Visual novel
Toaru Majutsu to Kagaku no Ensemble (とある魔術と科学の, Toaru Majutsu to Kagaku no Gunsō Katsugeki (Ansanburu)?, lit. "A Certain Magical and Scientific Ensemble Action Picture"), translated as A Certain Magical and Scientific Ensemble, is an adventure talking game based on the Toaru Majutsu no Index universe. It was developed by Guyzware, published by Bandai Namco Games and released for the PSP handheld console on February 21, 2013.[1] The game features four storylines from the Toaru Majutsu no Index main series, and the Toaru Kagaku no Railgun sidestories converging, with the involvement of Kamachi Kazuma.[2]

Visual novel or "adventure game" elements are retained in the game, similar to the previous games, featuring sprites with limited animation, and text presented under the screen indicating their dialogue. There are apparently different sets of sprites for characters also different sprites for characters and interfaces during gameplay, moreover, some of the sprites are animated, instead of the usual static sprites found in the previous games.

Missions or quests can be accessed from the map, at the start of a new game, where the player can chose a place with some "event". The map encompasses of all Academy City. In the map, the player can view the character whom the event is about, its name, the place where it will occur, and the other characters the player will be accompanied by. Some events need to be unlocked first. The events that are depicted on the map changes depending on the time on the player's PSP.

The game scenario is written by Kamachi, and is split in four stories: "Magic (Surface)", "Magic (Hidden)", "Science (Surface)", and "Science (Hidden)", with each story having a different protagonist. According to Dengeki Daioh magazine, it is also a lead in to the Toaru Majutsu no Index Movie, and introduces new characters to it. Kamachi personally wrote the "Magic (Surface)", while the other routes were discussed with him by the developers, referring to the route as the traditional "magician infiltrating Academy City," story. The story occurs before the Daihasei Festival Arc (Index).[3]

In the "Magic (Surface)" story, the Gate of the Gods Come from the Heavens, a Magic Cabal, whose existence is wrapped in a veil of mystery. This story is the one that is featured in Toaru Majutsu no Index: Road to Endymion. In the "Magic (Hidden)" story, the Venus Probe Contest, is a contest in which rockets are launched throughout the world to probe Venus. An event related to that project called the "Venus Probe Project Race" is being held on the Academy City SNS Rondo Net. Here, an incident begins when Kamijou Touma applies for the race. Finally, in the "Science (Hidden)" story, the Academy City SNS Rondo Net is a type of SNS that has grown popular among Academy City students, where registered users can not only communicate amongst each other, but can also acquire things like coupons and for buying things. The number of users of the service has grown explosively. Saten Ruiko has an eye for the current fads, so she tries out the service [4]

The game takes place a few days "before the miracle began," referencing the movie's title. The game begins at their respective routes of the Science Side and the Magic Side, but later intertwine at a certain point.[1]

Early development of the game had the storyline revolve around Toaru Majutsu no Index exclusively, which what Bandai wanted initially. However, since the story of the game wasn't finished yet, and the fact that Kamachi's story for the movie included a lead in bit that didn't fit in the movie but Miki Kazuma didn't want to just throw it away. From that point on, the game had elements from Toaru Kagaku no Railgun added into it.[3]

Another interview reveals that new characters are thought up by Kamachi, to which Itou from Bandai discusses the details of the story with Kamachi and Miki. The scenario for the game that Kamachi wrote is apparently as long as entire light novel. From the same interview, it is revealed Saten Ruiko's role has been greatly expanded in the game, due to the efforts of her scenario writer. Touma will still have the standard fanservice scenes with the new girls, two of which has yet to be revealed. The interview also implies the possibility of pregnancy endings, a recurring trope in Guyzware games, though this may have been a joke among the developers.[5]

The gallery has a music section showing off the various music used in the game.

In the shadows of the movie, the game only sold about 19,000 over the weekend, minimal compared to its predecessor, the Toaru Majutsu no Index PSP game.[6] 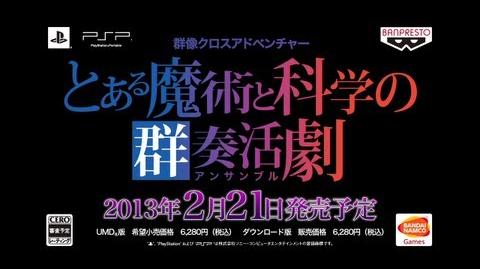 ＰＳＰ『とある魔術と科学の群奏活劇（アンサンブル）』第１弾PV
Preview of Toaru Majutsu to Kagaku no Ensemble videogame. 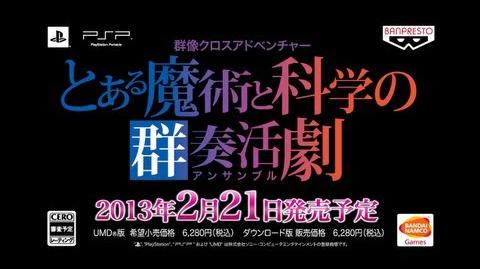 ＰＳＰ『とある魔術と科学の群奏活劇（アンサンブル）』第２弾ＰＶ
2nd Preview of the videogame. 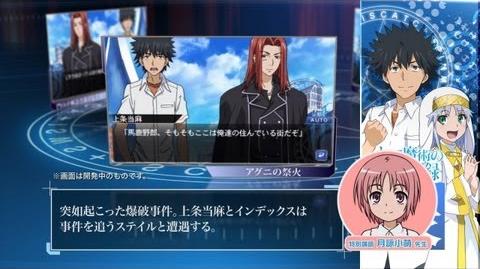 ＰＳＰ『とある魔術と科学の群奏活劇』第２弾ＰＶ（小萌先生解説入り）
2nd Preview of the videogame with Tsukuyomi Komoe commentary. 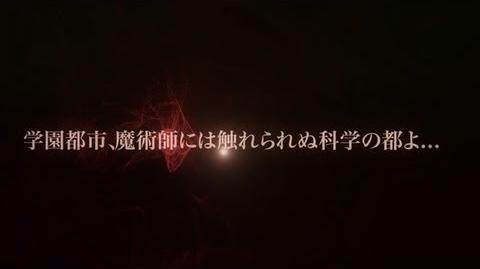