It was later confirmed that Kamanaka Nobuharu will be directing the anime.[17] On March 23, 2019, the PV for the anime was uploaded on Toaru Project channel. The full staff is also revealed to have Sugihara Kenji for Series Compostion, Yaegashi Yohei as the character designer, and keeping Iuchi Maiko for the soundtrack. Moreover, the first OP is revealed to be done by THE SIXTH LIE called Shadow is the Light to be released on August 21, 2019 [18] and the ED is revealed to be done by Sajou no Hana called Parole to be released on July 31, 2019,[19][20] and later confirmed to be getting 12 episodes.[21]

A second PV and key visual was later released for AnimeJapan.[22] Esther Rosenthal was also revealed to be played by Kubo Yurika.[23] The anime was later confirmed to start airing on July 12, 2019, with the first episode getting an advanced screening at Yunika Vision on June 29.[24] Two more PVs, each featuring the OP and EDs were later uploaded on June 22, 2019. After the advanced screening of the first episode, the official Toaru Project later revealed the VAs for the members of Scavenger. Leader will be voiced by Fujita Akane, Naru by Aoi Koga, Seike by Yuka Nukui, and Yakumaru by Nozomi Nishida.[25]

It was later confirmed that Nagai Tatsuyuki will return to direct the anime. Along with Mikoto and Kuroko's seiyuus, Toyosaki Aki, Itou Kanae, and Asakura Azumi were all confirmed to be reprising their roles, as Uiharu Kazari, Saten Ruiko, and Shokuhou Misaki respectively.[26] A key visual of Mikoto and Misaki in their Daihasei outfits was also shown, indicating an adaptation of the Daihasei Festival arc as seen in the Railgun manga.

A new card game for iOS and Android devices was announced during the Index III Special Broadcast on January 5, 2019 with a small teaser movie. The game is an "academy superpower battle RPG" and will as a free-to-play title with item-based micro-transactions in 2019 in Japan. The game allows the player to relive scenes from the anime and build decks using the characters from the from anime, movies, the latest light novels, and from sidestories. Attesting to this, the teaser movie briefly showed Othinus, Leivinia Birdway, and Kuroyoru Umidori. The game is being developed and published by Square Enix.[27] The theme song of the game, entitled "JUNCTION", will be performed by Kurosaki Maon.[28] 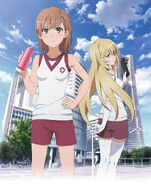 Key visual of the third season of Toaru Kagaku no Railgun.

TVアニメ『とある科学の一方通行』番宣PV（ED Ver.）
Add a photo to this gallery

Retrieved from "https://toarumajutsunoindex.fandom.com/wiki/Toaru_Project?oldid=184292"
Community content is available under CC-BY-SA unless otherwise noted.