One of the more obscure short stories written in the universe by Kamachi, it was released on the Dengeki BUNKOYOMI edition of the Dengeki Bunko Official Bootleg Book in March 2006, with Otani Osamu as the parody illustrator.[1]

Kamijou Touma is living his everyday life when all the girls around him suddenly ask him to return the favor from Valentine's Day, but he has no memory of receiving anything. It turns out he assumed he would never get any chocolate on Valentine's so he drowned his depression in alcohol. He got so drunk he lost all memory of February 14, but he had drunkenly gone all around the world and caused tens of thousands of girls to fall in love with him in the process. Touma laments his misfortune as these unremembered actions cause him to be chased around.

During March, Touma and the others approach graduation as third years. They think back on the long days they spent together. Touma returns to the classroom after the ceremony and suddenly realizes he has no idea what he will do after graduation. The next thing he knows, he is being invited to Necessarius, being invited to become a teacher and join Anti-Skill, and begged to do various other things by other people.

Released just after the 11th volume, the characters begin to refer to things that would likely occur to Touma as they speculate on his future after graduating high school. It is likely a list of foreshadowings that the fanbase has speculated that Kamachi has planned to introduced into the story. Below is the list and the likely concepts that have been introduced after the story was published:

In the story, Stiyl refers back to 'previous' volumes which are supposed to have happened in between when the story takes place and where the main story was at the time it was written. Given the nature of the story and the 'previous' volumes in question, these references are for comic effect rather than foreshadowing: 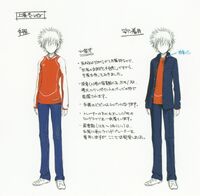 Cleared cover.
Add a photo to this gallery

Retrieved from "https://toarumajutsunoindex.fandom.com/wiki/Toaru_Sangatsu_no_Zouyo_Koukan_%26_Toaru_Sangatsu_no_Ni_Rei_Ichikan?oldid=203318"
Community content is available under CC-BY-SA unless otherwise noted.