Her name is part of the theme of the Tsuchimikado family being based on seasons. Part of her name can be translated as summer (夏, natsu?).

Maika has short, blue-black hair swept back by her bonnet that barely reaches her shoulders. She wears a maid attire because she's a student at Ryouran Maid School. She has a friendly relationship with Kamijou Touma and Index. She can be seen constantly riding atop a cleaning bot.

Since the maid school has classes every day[3], she never wears anything but her mandatory maid outfit -- a fact that she has pointed out proudly.

Maika can usually be found riding atop an Academy City Cleaning robot. Interestingly, despite the machine's constant spinning motion, she never seems to get dizzy. She is a good friend of Mikoto and Shirai Kuroko as she works as a maid at their school.

Even though Maika makes her official residence at her school's dormitory, she sometimes chooses to live at her brother's apartment; for instance, she once stayed at said residence because her dormitory's air conditioner had broken down.[4]At one point, Misaka Mikoto surmised that Maika may perhaps be into "Boy Love" stories, however, Maika almost instantly refutes this, stating with a big smile that her favorite books are the ones where the older brother falls in love with the younger sister.[5] This further reinforces the case for her apparent love of Motoharu.

She is a kind person, willing to throw a wish that Motoharu would grant her if she followed his instruction into becoming his adopted sister. She would readily share her possessions with others, and even give away a number one spot to others in rankings. Motoharu analyzed that she wanted to be useful and further analyze that it was her fear of being abandoned that brought this. However, Motoharu realized that though she wanted to be useful, it is not because of the fear of abandonment but because she was truly kind. This epiphany made Motoharu realize that Maika was truly being family to him and so he did not need to continue to analyze her as some stranger. From then on, Motoharu silently swore that he will truly protect Maika as his little sister.[6]

Despite the formal and polite nature of the vocation she has chosen to study (as an "imouto's promise" to her brother[4]), Maika is gleefully unprofessional and casual, openly referring to people by their family names without using the polite-suffix of "sama" or "san" in the way a maid normally would. Point in fact, her boyish way of speaking without using any honorifics required by the catering profession would more than likely land her in hot water should she follow through to an actual career as a proper maid.[7]

She is an expert cook and can easily discern the ingredients and cooking process of high class cuisine just by evaluating the dish for a short period of time, she is also self demanding when it comes to cooking, and can easily get fired up if she sees someone create high class cooking.[8]

Before her future stepbrother came to Japan, Maika was an orphan in a Japanese orphanage. Motoharu, then tasked with infiltrating Academy City and becoming an esper, adopted her as his stepsister to maintain his disguise because her circumstances made it easy to fake her official records.[9] At first, the two lived in separate dorms, but as their relationship grew, her kind heart compelled him to protect her not only out of necessity but also out of a true desire to. It was Motoharu who suggested Maika to go to a maid school,[6]

It is unknown if she is aware of Motoharu's status as a magician or even the existence of magic.

Throughout the series she is well known for performing what is commonly called "almost girlfriend services" to Motoharu. Services that include and are not restricted to cooking for him, massaging him, cleaning his room and taking care of his health. All of those are performed on regular basis whenever she can muster enough free time.[10]

She makes her first appearance in the arc greeting Touma and Misaka 10032, as they enter the former's dormitory, stating that she came over to sleep with her brother as the air conditioner in her dormitory is broken, and makes an innuendo regarding it. Before leaving, she remarks on how Touma should take care of Index, the run away girl he is hiding.[11]

Maika appears in the Tokiwadai Middle School and requests Mikoto for a romantic incest manga.[12]

Touma, Motoharu and Aogami Pierce get into a fight with each other after Motoharu realizes that Maika called the two using the "Onii-chan" honorific, much worse, she calls everyone she meets Onii-chan.[13]

Index mentions that Maika gave her directions to Touma's school.[14]

Maika is embroiled in magic side affairs as Stiyl Magnus uses her as a messenger to Touma as he has kidnapped Index.[15]

During the festivities, Maika sells authentic maid "bentos" to the crowd,[16] and later accompanies Himegami Aisa during a lull in A Certain High School's competitions, helping Touma find Index.[17]

In the events before the invasion, she becomes elated as she is able to wear her lacy cuffs of her white shirt, and helps Touma and Index on new recipes.[18] Later, she leaves a large cooked pot stew for Motoharu as she will be leaving for awhile, not knowing this, he shares it with Touma and Index, who tells him the apparent reason why she left such a large stock for Motoharu, much to his horror.

Acqua of the Back ArcEdit

After Itsuwa follows Touma home to protect him from Acqua of the Back, she begins cooking miso soup for Touma and Index, there Maika smells the scrumptious smell of the miso soup. Maika is able to automatically pinpoint the special ingredients Itsuwa made, much to her bewilderment, and acknowledges Itsuwa's skill. Seeing to one up her, she returns to Motoharu's room and throws away the cream stew she prepared for his dinner, in order for her to make a much better miso soup.[19]

Maika first appears alongside Kumokawa Maria, the latter, having a one-sided conversation about her pride, where Maika states that she has already heard her say that. Maria later asks Maika on how she is overly excited, so Maika tells her how earlier in the day she saw someone she thought dead in front of her. Maria becomes excited because this, misunderstanding her relationship with Touma, though calms down because her pride may swell up again. Maika then tells that they are merely friends, which excites Maria again, thinking that it will strengthen her after Maika shoot her prediction down, much to Maika's chagrin.[20]

Maika first appears during the Ichihanaransai with Kumokawa Maria. Once again, she tries to sell her maid sandwiches to the crowd. Maria comments on how Maika has no unity in her uniform's design, to which Maika references her having no right to say that as she wears such a queer costume. Maria once again references her "pride", saying that having it hurt is a good thing, and that Maika will never strengthen. However, Maria states that it is better if she doesn't go down that route if she has no set rule, as it would give her an unrecoverable damage.[21]

Maika then remembers that Maria should have a quota of maid sandwiches to sell, to which Maria says that the label is everything, helping one sell the product. She reveals that she attached a sticker of her face with the message "middle school girl maid looking for a future master," which caused quite a commotion, and had her punished by a teacher, but she managed to finish her quota, irritating Maika.[21]

As the festival goes on, Maika and Maria notices Silvia passing by. They immediately know that she is a Royal Maid that works for the British Royal Family, calling her a monster. As they wonder why she was in Academy City, she is has already left.[21]

Motoharu predicting that Maika will be used as a tool of negotiation against him as a reprisal for his investigation of the Agitate Halation Project, is forced to use dark side tactics to protect her, something that he never hoped to do. He forces her to believe that she has to clean an automated factory in School District 17 as an extracurricular activity. He then fakes her death by burning his dorm and having the media and the dark side believe that she has been killed. In essence, Motoharu has "killed" her officially.[22]

Throughout the entire arc, Maika spends her time cleaning the factory, unaware of her brother's rampage and the riots of the "heroes" that occur due to the Agitate Halation. After the end of the arc, she is with Index going to a certain hospital, complaining of what had transpired, and is infuriated that she did not get any credit points from her school for cleaning an entire factory by herself.[23]

On the morning of December 11th, Maika was stocking up on ingredients at an emergency food site in front of the District 7 Station when her brother came to her,[24] needing to escape from Academy City after his attack on Aleister Crowley for not doing anything to protect her during the heat wave and Element infestation.[25][26] After a brief explanation, Maika agreed to accompany him and Karasuma Fran as they attempted to escape with the help of Touma, Index and Othinus.[24] However while she was climbing the city wall,[27] she was struck by Aleister's curse magic sword, which embedded itself in her chest, intended to fatally scatter if careless dispelled,[28] and summoned Karma-bearing chain beasts to her position.[29] She accompanied the group during their subsequent ascent through the Windowless Building in an attempt to find a way to safely remove the shadow sword, though she remained not fully aware of her situation.[29][30][31][32][33][34]

Following the evacuation of Academy City, Maika went to the island of Tahiti in French Polynesia with her brother,[35] after he separated from Touma and Aleister's group in Egypt.[36]

She makes an appearance during the Tokiwadai Midsummer Festival berating Kuroko for not helping her, as well as complaining about Index's gluttonous appetite. She later hears Mikoto's violin solo at the end of episode. Later she appears during the Sisters Arc serving breakfast to Mikoto[37]

Kinuhata Saiai uses an Indian Poker card to visit Maika's experiences. Here, Maika is accosted by Motoharu to wear a lewd maid outfit, much to her annoyance, that is until Motoharu started flattering her. Saiai notes how Maika isn't as opposed to what Motoharu wants as she lets on, indicating that Maika may also have feelings for him. The dream comes crashing down when Motoharu shows off a maid swimsuit outfit. [38]

Bundled with Rainbow Spectrum Colors, Maika appears with her brother, chastising him of trying to open the mysterious letter for Kamijou Touma, much to his chagrin. The letter later disappears into the hands of Kazakiri Hyouka.

Maika appears to Index just after Hyouka disappears. Here, Maika rides on a cleaning robot, leading to Index to comment that she is a summoner, not knowing Index has once again noticed a reference to Egypt after seeing a balloon pop with hieroglyphics on it.[39]

Maika later advises Index on what to buy in order to make Touma happy, to which she shows her a steam oven. Only after Maika said that Touma might be using the oven to cook something good for someone did Index buy the oven. Maika later indicates where the oven will be delivered, as Index did not know Touma’s dorm address.[39]

Due to the fact that Maika is a side character, Haimura had a little leeway in designing her character, giving her short hair, which befits her being a maid.[40] 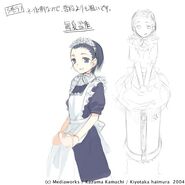 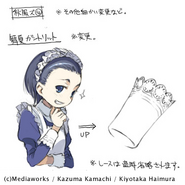 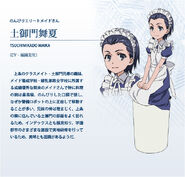 Tsuchimikado Maika's character profile for the Railgun S anime from the second BD/DVD booklet.
Add a photo to this gallery

Retrieved from "https://toarumajutsunoindex.fandom.com/wiki/Tsuchimikado_Maika?oldid=209978"
Community content is available under CC-BY-SA unless otherwise noted.