Toaru Majutsu no Index Wiki
Register
Don't have an account?
Sign In
Advertisement
in: Terminology, Magic, Magic Items and Artifacts,
and 2 more
English

The Walking Church (歩く教会, Aruku Kyōkai?) is a magical defensive tool that is worn by a user[1] in the Toaru Majutsu no Index universe. It is used by the Anglican Church.[2]

Currently, the appearance of the Walking Church varies depending on its use. The most notable example is the Walking Church worn by Index, a pure-white robe with golden embroidery at its edges, and it comes with a white nun cap with a golden metal band.[1]

Another form of the Walking Church is that of the silver Celtic Cross (ケルト十字架, Kerutu Jūjika?) that Himegami Aisa wears as a necklace to seal her ability, given to her by the Church. Despite being hung around her neck, it somehow is strangely appears to float.[3]

As explained by Idol Theory, the Walking Church symbolically takes the essential elements that constitute a church -- and since the church provides protection to the needy, the Walking Church will replicate that protection for its wearer. For example, Index's Walking Church uses specific cloth-weaving, line stitching, and embroidery to successfully recreate all essential elements that make up a church. Because of this, anything that would not destroy a real church would be rendered ineffective against the wearer.[4]

Coupled with the fact that Index's Walking Church specifically replicates the Holy Shroud of Turin, the defensive ability of her Walking Church has been extended to the Pope-class, rendering the defensive capability of the robes similar to the level of a nuclear bomb shelter, and its power matching the level of enchantment on the London Cathedral.[5] Any magical and physical attack on Index would be absorbed,[1] although, according to Stiyl only the Dragon of St. George could destroy a Pope-class barrier such Index's Walking Church.[5] Her Walking Church was maintained by magic and, as such, could be tracked by magicians.[6]

The Walking Church of Himegami Aisa however, seals off her ability to attract vampires. According to Stiyl Magnus, he, Kanzaki Kaori and Tsuchimikado Motoharu own Walking Churches as well, though it is unknown what kind of defensive abilities their Walking Churches contain.[7]

Himegami Aisa's Walking Church is first featured during the arc.[11]

Oriana Thomson attacks Himegami Aisa believing that she is an agent of the Anglican Church, after seeing Aisa's Walking Church on her person.[12] 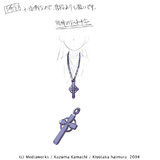