Wedge of Forbidden Color (禁色の楔, Kinjiki no Kusabi?, Yen Press: Fetters of Forbidden Colors) also known as Forbidden Colored Robe refers to the separation formed from the mixing of a inappropriate color (depicted currently as the color yellow exclusively) with that of a normal a robe, though it refers to the whole of the robe and vestments. It is a spiritual tool using forbidden color to turn a robe into a seal.[1]

The forbidden color is applied near the edges of the sleeves and hemline, and are designed to look torn. Apart from this, the veil that is worn by the nun's has small metal bands attached to them. According to Haimura Kiyotaka, he designed the robes with the intent of making them resemble poultry in combination with Agnese's clothes for the Rosary of the Appointed Time.[2]

The Roman Catholic Church seem to be the only faction seen to use the robes.

The robes has two effects, one is to prevent the user from using magic. The first one is achieved by the use of the forbidden colored robes using the caster's life force and converting it into magical energy, though since the wearer of the robes are using the energy on useless tasks (as is the punishment for those who wear it), the effect would be the wearer unable to use magic.[1] However, if the wearer is able to use magic, the binding of the clothes causes a counterspell that makes the wearer feel tremendous pain.[3]

Dying the forbidden colored robe with something to cover up the forbidden color such as blood, can seal off some of its magical properties. This would enable the wearer to cast magic.[1] The effect can also be bypassed by if the caster can destroy the binding function of the robes by following the pattern and then destroying them in order, since the magic was cast on the sewing and weaving of the cloth.[3]

Lucia and Angelene however was able to modify the robes to such a great extent that they could use it as a tool for a magic spell, this spell was the reason they were able to escape the ice ship in the first place.[3]

The other effect is for the wearer to be unable to move up to a certain distance; when a user has reached that point or gets beyond that point, the wearer would feel tremendous pain.[3]

The robes make their first appearance being worn by both Sister Lucia and Sister Angelene. Here, they were able to use the robes themselves as a way to create a portal to escape the Ice ship they were in. Here, by smothering the forbidden color with her blood, Lucia is able to make use of magic.[1]

They are later captured by the effects of the band of their caps, preventing them from escaping.[1]

The robes are later destroyed by Kamijou Touma's Imagine Breaker (though unwittingly), and lose their effect.[4] 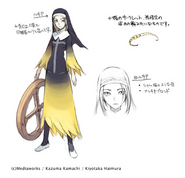 Design of the Forbidden colored robe for Lucia, by Haimura Kiyotaka for Volume 11. 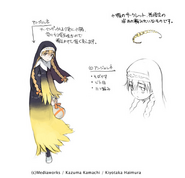 Design of the Forbidden colored robe for Angelene, by Haimura Kiyotaka for Volume 11.