Index III Episode 4
Yamate (山手, Yamate?) is a minor character introduced in the Toaru Majutsu no Index series. He is an operative of BLOCK. He is the first member of the organization to be killed in the ensuing struggle between the various underworld organizations of Academy City on October 9 on the current year of the timeline. His face is borrowed by Etzali after killing him, and used his appearance to infiltrate the organization.[1]

Yamate is portrayed as a young man with a lean body type. His hair is parted in the middle.

He is an operative of member and is one of its central figures,[2] privy to the organization's plans of a rebellion against Aleister Crowley and to escape the city. Etzali thought to himself after taking Yamate's appearance that it was surprising that Yamate was someone important for his organization, noting that he was rather weak.[2]

Yamate is the central member of BLOCK sent to destroy Management's apartment in Family Side in order to prevent other organizations like GROUP to discover SCHOOL'S plans. This is due to the fact that they were forced to modify their plans in order to accommodate SCHOOL's actions in order for the organization from getting in their way, giving up on dealing with SCHOOL's actions.[2]

Yamate and with several armed men assault the apartment. Etzali, under the guise of Unabara Mitsuki, who was sent there by Tsuchimikado Motoharu to find some clues on Management's dealings, is forced to escape from them to another room. Trapped, Etzali decides to attack one of them and take their appearance using his magic; Yamate was the unfortunate victim. He later stuffs Yamate's corpse inside a closet. What Etzali didn't realize is that Yamate is one of BLOCK's central members, because of this he couldn't simply slide away unnoticed and is forced to keep himself undercover, indirectly monitoring BLOCK's current activities.[2]

BLOCK never realizes that Yamate had been replaced even after Etzali compromises their plan and escapes the group,[3] though GROUP noticed Etzali's actions once Tsuchimikado Motoharu saw the real Yamate's mutilated corpse.[4] 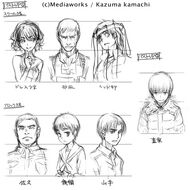 Rough sketch of Yamate along with other minor characters who did not get to have an illustration in volume 15.