Yamisaka Ouma (闇咲 逢魔, Yamisaka Ōma?) is a Japanese magician introduced in Toaru Majutsu no Index in Volume 5. He is adept in the use of a magical azusayumi crossbow, which amplifies the power of his magic. He appears to capture Index in order to access a grimoire inside her that would allow him to save a woman who has been cursed to die.

He is a tall man who is often seen wearing a black suit and tie. His eyes are always closed except when he is in pain or experiencing some other strong emotion. The Bow of Azusa is mounted on his right hand and acts as his main weapon.

He aims to use methods that would mitigate casualties and destruction. He fell in love with a girl who was cursed to die yet refused to cry out for help. He originally claims to act for his own ends, but that is only because he doesn't want to blame his actions on and shift his sins to her.

Not much is known about him, though what is known is that he visited a hospital where he saw a girl with cursed markings on her body. Noticing him, the girl had a conversation with him, with her mistaking him for a funeral worker due to him wearing a black suit all the time. Ouma realized that the girl had accepted her fate, and remained resolute through her suffering.

Ouma then fell in love with the cursed girl, and tries to find a way to save her. However, he feels that he has to commit several sins in order to achieve that goal and that she would be the reason behind those actions; thus, he denies to himself that he is trying to save her.[1]

On August 31, Ouma appears during the afternoon searching for Index. Using his magical crossbow, he successfully manages to locate, and kidnap her while eluding Touma.[2] He takes her to the roof of a building, and begins the ceremony of extracting Baopuzi, a Chinese grimoire that supposedly has a way to make someone immortal as well as a way to create a miracle drug that can cure any illness, the latter of which is his true goal in kidnapping Index.

Predictably, the knowledge of the grimoire he is extracting from Index painfully deteriorates his body. Index pleads him to stop, though he disregards her warnings and continues on. In one instance, Ouma's memory regarding the cursed girl flows into Index, and Index tells him that his rationalizations for denying the reason behind extracting the grimoire are wrong, as he truly wanted to save the girl because he has fallen in love with her. Though because of the sins he committed, he doesn't want her to be the reason for committing the sins. Index once more pleads Ouma who is now squirming in pain to stop, as his death may cause even more suffering for that girl.

Touma (who overheard the conversation between Index and Ouma through his cellphone) arrives just in time to destroy the ceremony, and chastises Ouma for trying to sacrifice his life just so he can save the cursed girl's, as well as making it seem like he was the victim. Touma then offers Ouma a deal: he would dispel the curse on the girl’s body using his Imagine Breaker, which he explains to Ouma can negate any supernatural phenomenon. The two of them later leave Academy City together, with Touma apparently successful in dispelling the curse.[1]

Touma references Ouma as the one once again ties up Index and leaves her in their dorm due to the fact that she was making a fuss. Touma later notes on how Ouma helps break back into Academy City.[3]

Ouma mainly uses an Azusayumi (梓弓, Catalpa Bow?, Yen Press: azusa bow), a ritual instrument normally used in ceremonial dances by priests. The bow's purpose is not the shooting of arrows, but to use the pulling of the bow to cause sounds. It's is said that the impact can shake up demons. Originally, it was meant to be used to correct spiritual damage. Ouma's takes the form of a small bow mounted on a gauntlet on his right hand. Ouma can cast several spells by pulling the string of the bow to cause a sound.[4][5] Additionally, Ouma has had his five physical senses enhanced (presumably through magic) to the point shutting down one or two senses won't hinder him, which is why he usually keeps his eyes closed.[5]

Appearing only in a single volume, Ouma's design is static. According to Haimura, Ouma was originally a character for a Dengeki hp short story, this being the reason why he is not colored,[8] and for the most part, the other character sketches introduced for the 5th novel volume. 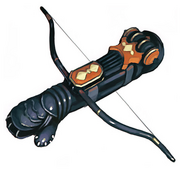 Yamisaka Ouma's Azusayumi as it appears on Toaru Majutsu no Index Volume 5's back cover. 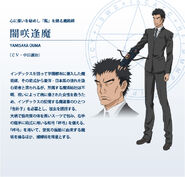 Character design for the Toaru Majutsu no Index II anime.
Add a photo to this gallery

Retrieved from "https://toarumajutsunoindex.fandom.com/wiki/Yamisaka_Ouma?oldid=241401"
Community content is available under CC-BY-SA unless otherwise noted.