Yumiya Rakko (弓箭猟虎, Yumiya Rakko?) is a character introduced in Toaru Kagaku no Railgun. A student of Private Shidarezakura Academy, she is also an operative of SCHOOL and was its sniper before Sunazara Chimitsu.

Her surname "Yumiya" (弓箭) literally means "bow and arrow". The given name "Rakko" (猟虎), as a whole, is the word for "sea otter" in Japanese; if interpreted separately, these two kanji literally mean "hunting" and "tiger" (although the Japanese for "hunting tiger" is not written and read as such).

Rakko appears as a normal girl with long black hair and wears it with two pigtails.[4] She normally wears her school uniform, but when on a mission she wears a pouch belt,[5] alongside her long-sleeve shirt to conceal her weapons and a black skirt. Underneath she wears a black full bodysuit, which when worn with her outfit makes it look like she's wearing stockings.

After being defeated and blown up by Frenda, she later gets an eyepatch and a beak-like mouth covering her jaw, mouth, and nose, allowing her to speak in a high-pitched robotic voice.[2][6]

Her demeanor in school is in stark contrast to her demeanor during missions. In school, she is a shy girl that gets easily flustered to the point that she stutters, and has dreams of becoming popular at school and becoming an idol.[7] During missions she is very serious and appears to enjoy her mission especially if her target has irritated her, as shown when she smiles after shooting Frenda Seivelun down.[5][8] Indeed, Frenda compares her sadism to hers, enjoying the thrill of hunting down a target until the last minute in order to hear how they will plead for mercy.[9]

Despite her inability to make friends, she is apparently well-liked in her school, enough for classmates to invite her to go outside of the School Garden with them.[5][8] As such, her being a loner is her own misconception.[2] Initially jealous of Frenda and Saten's friendship, especially Frenda's apparent "popularity" compared to hers, she gains a twisted definition of friendship after Frenda beats her, believing that Frenda doing her best against her as a sign of friendship.[2]

Not much is known about Rakko. However, when she was younger, she was part of Clone Dolly alongside her younger sister, Yumiya Iruka. Rakko in her younger years was a crybaby and needed Iruka to calm her down. At some point, they visited Clone Dolly's Third Laboratory: Ideal, a place intended to raise Level 5 espers. Much of Rakko's time there was crying when she was surrounded by other girls eager to make new friends, as Iruka was busy meeting Mitsuari Ayu and Hokaze Junko.[3]

Rakko later enrolled in an academy in School Garden, though her sister instead enrolled in the more prestigious Tokiwadai Middle School. According to Rakko, she spent a year and a half in school not talking to any of her classmates.[5] It is also unknown when she became an operative of SCHOOL.

Rakko first appeared in an Indian Poker card that Misaka Mikoto was using while searching for the Bust Upper card. In the dream, Yumiya Rakko (whose place Mikoto took) was waiting for Yobou Banka when she saw a lady heading her way. Analyzing the situation, she guessed that the lady was going to scout her as an idol, delighted at the prospect but also worrying about alienation from her classmates. However, to her dismay, the lady was actually after Kongou Mitsuko behind her, who declined the offer.[7]

She made her proper first appearance as she exits her school. Much to her surprise, her classmates call out to her and invite her for a little adventure out of School Garden. Rakko was about to accept until she is contacted by the Boy with goggles, telling her to hunt down the ones that defeated the team that was supposed to capture Saten Ruiko and her Indian Poker card, whom they believe may have information regarding the Tweezers. Disappointed, she turns down her classmates' offer. She later gears up and investigate the scene of the attack, and easily narrows down her targets. She makes a point that her targets should make her hunt enjoyable as they took away her chance of becoming popular at school. Not long after she was able to track them down, and shoots one of them, Frenda of ITEM.[5][8]

Frenda immediately takes action, taking herself and Saten into the department store under the belief that she could not fire in a crowd. She is sorely mistaken as she discovers that she is being hunted down, and Rakko is blending in with the crowd. Frenda later notices that Rakko is just like her, enjoying the thrill of hunting someone down. Frenda believes that if they do something that goes out of Rakko's pattern they will kill her. In the end, Frenda and Rakko a dangerous cat and mouse game in the department store, with Rakko easily outmaneuvering Frenda every time, injuring and tiring Frenda in the process. Out of ideas, Frenda recalls that Rakko is after Saten not her, and thinks of leaving her as bait to Rakko to save herself. Her plans are overturned when Saten herself says that they should split up as she knows Rakko is after hear. Surprised by this, Frenda finds a way to counter Rakko. She has Saten carry dolls with her,[9] the same ones Rakko knows carries Frenda's bombs, while she plants bombs around the department store.[2] Rakko later finds Saten with the dolls and believes that Frenda might be trying to sacrifice Saten to escape. She is later horrified that Frenda might use a large number of bombs to kill her in the crowd. When Saten drops some dolls, Rakko runs behind a pillar. However, that is the exact moment Frenda was waiting for as only someone who thought they were bombs would hide from it.[9]

Rakko then engages Frenda in close quarters combat, with Rakko using her rifle while Frenda uses small bombs. Their fight causing a ruckus and making people run away in fear of getting caught in the crossfire. Saten too leaves at Frenda's behest. However, because of Frenda's injuries, Rakko gets the upper hand. Just when Rakko seemed victorious and Frenda on the floor, Frenda reveals she was taking cover and was waiting for bystanders to leave. Frenda later detonates several bombs in the department store, creating a hole to the outside of the building. Rakko survives but notices the smoke and the lack of oxygen. Believing that Frenda made a mistake with taking out all the oxygen in the room through her thermobaric bombs, Rakko goes toward the hole to get some air. However, Frenda was expecting Rakko's moves and shoves small bombs into Rakko's open mouth. As she gags, Frenda then pushes her out of the hole, and in one final gesture sends even more bombs down with her, creating a large explosion.[2]

Despite all odds stacked against her, Rakko survives, due to the efforts of Yobou Banka, the Boy with goggles. She gets an eyepatch and a metallic beak-like cover on her jaw, mouth, and nose. However, because of her injures she no longer has her strong sense of smell she uses for her tracking. She is with the other members of SCHOOL when Kakine Teitoku finally discovers the whereabouts of the Tweezers due to the efforts of Banka getting vital Indian Poker cards. Rakko, having a strange obsession towards Frenda due to their last fight at the mall, tries to plead with Kakine to let her confront Frenda again in spite of her handicap, but she quickly runs his patience due to SCHOOL's focus on the Tweezers. In her chagrin, she leaves, and both the Girl in dress and Kakine share the opinion that Rakko has outlived her usefulness. Kakine then tasks the Girl in dress to prepare for the replacement sniper for SCHOOL, regardless of Rakko's response to the situation.[2]

Between the time Rakko leaving SCHOOL and the start of the arc, ITEM killed her, with Kakine acknowledging her fate.[10][11][12] It is unknown how she died, but she is quickly replaced by Sunazara Chimitsu as SCHOOL's sniper.[13]

In the anime adaptation, her name is mentioned in the mail which Hamazura Shiage sent to the member of ITEM.[14] In the manga adaptation, her silhouette is shown in Frenda's flashback with regards to her death.[15]

She is referred to as SCHOOL's sniper and is apparently very good at it. She is able to shoot Frenda accurately despite apparently having no weapons on her person within a crowded area.[5][8]

She is also good at tracking, able to analyze how many targets she had, what shoes they wore, and their heights based on their pace length. Indeed, she is able to track both Saten and Frenda down shortly after arriving at the scene where Frenda attacked SCHOOL's lackeys.[5][8] She also has the ability to completely erase her presence.[2] Her greatest asset however is her nose, allowing her to follow her targets through their blood.[9]

Rakko has two collapsible sniper rifles, hidden inside her clothes and attached to her bodysuit. It can be broken down or reassembled by bending or straightening her arm. Bullets are fired via carbon dioxide from her sleeve.[2] Left arm is for an intermediate-range and right arm is for a short-range.[2]

It is revealed that her esper ability is similar to her sister's Wave Conductor as during her childhood in Ideal she used the same equipment to test her powers. However, it only showed a minuscule reading, and Rakko later claims she is talentless. Her level is 0, and since she never uses her powers in her teenage years she likely never developed as an esper.[16][2]

There are no specific details about Rakko at the start aside from the fact that the first sniper of SCHOOL is female. Haimura also expected that most readers of Index will associate the phrase "sniper from SCHOOL" with Sunazara Chimitsu. However, Sunazara will stand out in Academy City which is mostly composed of students, so he decided to make this particular sniper a student. Haimura also had the clash between Frenda and Rakko planned early on, so he modeled her after a "high school girl who is somewhat sly and a little loose".[4]

Later designs would add explanations to details, notably the "tights" that are actually a full-body suit and her hairstyle that is based on Soryu Asuka Langley from Neon Genesis Evangelion. The "hunting dog" motif of her design is also finalized. Haimura comments that he did not expect a trait like "a loner ojou-sama with a communication disorder" to be added to Rakko's character.[4]

Yumiya's design after fight with Frenda. Note the absence of the accessory that covers her injured lower jaw. 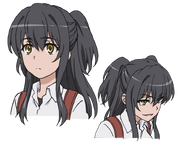 Retrieved from "https://toarumajutsunoindex.fandom.com/wiki/Yumiya_Rakko?oldid=598952"
Community content is available under CC-BY-SA unless otherwise noted.